How Much Do You Really Drink?

Few people are honest about their weight, finances, or drinking habits. We stretch the truth even in innocent conversations. But lying to ourselves about any of these factors can put us in harm’s way.

The ramifications of excessive alcohol consumption can be life-altering contributing toward both mental and physical decline. Not only is alcoholism linked to high blood pressure, raised cholesterol levels, increased risk of heart attacks and strokes, complications with prescription medications, and head injuries due to falls, it damages blood vessels and neurons in the brain as it prevents neurons from regenerating, and therefore die.

One study found that 78% of people diagnosed with alcohol use disorder displayed some form of dementia or brain pathology. People who binge drink, such as consuming five or more bottles of beer or one bottle of wine at a sitting in midlife, are three times more likely than those who do not to develop dementia by age 65.

More men are diagnosed with Alcohol-Related Brain Damage, or ARBD, due to more men consuming more alcohol than women throughout their lives. However, ARBD is especially problematic for middle-aged women because alcohol affects women more significantly due to the differences in hormones, body fat composition, and height/weight ratio.

Symptoms of ARBD include poor planning and organization skills; problems with decision-making, judgment, and risk assessment; impulsivity and difficulty controlling emotions; attention and slower reasoning; lack of sensitivity to the feelings of other people, and inappropriate behavior.

Most often, a diagnosis of a specific form of ARBD is given rather than the general term. For example, a doctor may diagnose Wernicke-Korsakoff syndrome, Korsakoff’s alcoholic psychosis, alcoholic dementia, alcohol amnestic syndrome, chronic alcoholic brain syndrome, or another condition based on a patient’s symptoms.

The most prevalent form of alcohol-related dementia is a combination Wernicke’s encephalopathy and Korsakoff’s dementia. A person may develop one or the other of these conditions, but they often occur together, as they are both caused by a thiamine (B1) deficiency. Wernicke encephalopathy is the first, acute phase while Korsakoff psychosis is the long-lasting, chronic stage.

While Wernicke’s encephalopathy is characterized by gaps in long-term memory, confabulation, and difficulty learning new information, it is possible for this form of dementia to clear up if a person stops drinking. However, it may become permanent, especially among people who are elderly or who have struggled with alcohol use disorder for decades.

Korsakoff’s dementia is the cluster of symptoms related to memory and cognitive difficulties and is longer-lasting. It may occur without the association of Wernicke’s encephalopathy. Some research suggests that those who recover from a single episode may have a normal life expectancy if they abstain from alcohol. However, a history of Korsakoff syndrome increases susceptibility to any future brain degeneration and raises the likelihood of later developing dementia.

Korsakoff syndrome causes problems learning new information, the inability to remember recent events, and long-term memory gaps. Memory problems may be strikingly severe while other thinking and social skills are relatively unaffected. Those with Korsakoff syndrome may “confabulate,” or makeup, the information they can’t remember and then actually believe their invented explanations.

Abuse the body and we abuse the brain. We do have choices in our health, quality of life, and longevity. What path do you choose?

(Navigating Alzheimer’s is available from amazon.com, ACTA Publications, and my website.) 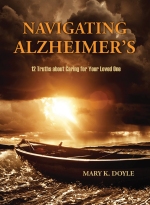