Serving Others as She Led

May 20, 2016 · by Mary K. Doyle · in Book, Catholic, Christian, Faith, Mentor, Saint Theodora and Her Promise to God, Seven Principles of Sainthood · 5 Comments 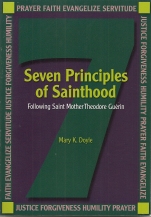 “First and foremost, Mother Theodore was a religious woman. In her humble way she sought to follow God’s will rather than her own. As a servant leader, she rolled up her sleeves and physically participated in her missions. She taught in the classroom, cared for the field animals, tended the crops in the garden, coordinated building construction with the workers, and tucked herself away in her office with stacks of paperwork.

Mother Theodore practiced what business writer Steven Covey calls:Principle-Centered Leadership.” Besides the typical leadership traits, the people around Mother Theodore knew her to be reliable, service oriented and proactive. She was concerned for the people involved. She sought to understand rather than become frustrated or angry at those who did not understand her or her mission.”

(See posts on Saint Theodora/Mother Theodore and the Sisters of Providence on the Facebook page for this book.)

← 10 Reasons to Pray the Rosary
Pray for the Sick →